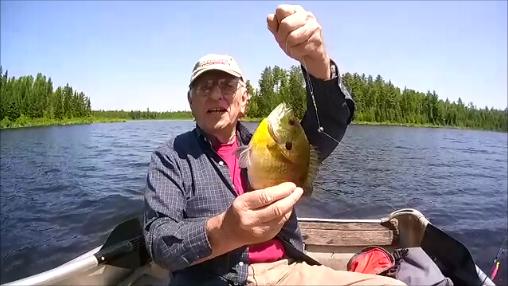 My dad turned 83 years old yesterday and just to make the younger world feel diminished, I dragged him all the way down the Wood Lake portage and forced him to catch fish on Wood Lake for the day.  The portage is 210 rods long or .58 miles long and it was muddy and rugged after yesterday’s heavy rains which is par for the course on portages.  For an old guy with a fake knee and a double bypass some 15 years ago, he does pretty well.

Of course, I brought along my sidekick Delilah.   Once we hit the trail, she began her Wood Lake portage routine of blasting ahead at full speed,  turning off the trail into the woods and running parallel back along the trail only to come out behind me.  From that point, she snorts past me again, tongue flopping and nothing but a blurry streak of fur to do it repeatedly for the entire trail. I figure that she runs about three times the length of the trail every time we walk it.   In the back of my mind, I’m waiting for the moment she drives out a momma bear and cubs to meet me, but that hasn’t occured….yet.

As I walked the trail carrying my oars, our rods and my pack, I noted the fresh tracks in the mud – two people ahead of me.    As a boy, I was trained to not leave tracks – not in the figurative sense connected to symbolically saving the BWCA,  but instead, for real.   Hunting and trapping as a kid, we never wanted to be followed and the best way to avoid followers is to never leave tracks as best we could and we still do this to this day.  As a result, I observe this telltale “flaw” in others all the time and today’s tracks in front of me were no different.  I could tell both were men, in their late 30’s to early 40’s, weighing about 185 lbs. each.    They wore big floppy hats, mosquito head nets, blue, white and black, paddling gloves, and brand new long sleeve, nylon button-down shirts with brand new nylon, zip off pants.

As Delilah blasted silently down the portage, about 150 feet in front of me, up a hill and around a curve, I heard her let loose with the most ferocious, attack-dog bark her nine pound body could muster!  First I thought ” bear”  but that was immediately corrected.  There was a scream and panic as a voice-in-terror yelled, “Gggaaaaaaaaahhhhhhhhhh!  GET OUTTA HERE!  GO AWAY!!!! ” as Delilah stopped them in their tracks.  I tried to call her off, but she was unrelenting, so I picked up my pace to see two guys decked out in nylon shirts, zip-off pants, trail boots, blue-white-black paddling gloves, big hats and bug nets.  Delilah finally shut up as her job was done attacking the space aliens.  I chuckled and said when they passed, “I bet that scared the crap out of you!” to which one replied “Maybe a little…”

Delilah looked back at me all proud and alert for taking down the “aliens” with a good, solid whoopin’.  Then, she blasted down the portage once again.

When we hit the water, we endured a beautiful day with moderate catching but enough to keep up busy all day long.  In a pretty true test, we found that live bait and artificial lures ended up producing  about “neck and neck” .    There was no real, obvious gain in using live bait over lures.   Later in the day, the wind picked up and screamed from the west making for about 1.5 hours of tough rowing with a significant chop and some whitecaps.  I put together this video called “A Landing Net’s Life”  since the I had the camera stuck to the net.

Upon returning to the parking because not much wears Delilah out, she took off and chased a 70 foot long semi roaring past on the Fernberg Road.  The present road crew tried to catch her but she blew past them, returning to me and prompting a parking lot visit by a concerned, but laughing foreman looking for “a little brown dog that was chasing one of their semi’s down the new asphalt.”  Delilah stood up on the truck seat and smiled at him.

Good dog, Delilah.  Never give up.

← My Big Fish at Northwind Lodge
Painting Chairs with Joe →

Into The Brush Art Program